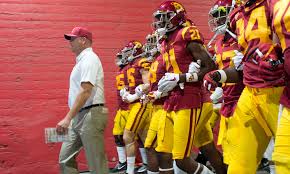 For recruiters like Donte William, USCs new football video production hires are quite significant. While the excitement that comes with USC was not immense in the first place, you will agree that today, the trend is amazing. The Trojans last week flipped Jacob Brown and Will Stout, five star talents from LSU. The duo had been working on a series of top viral videos for the Tigers.

Brown will in June serve as USC Director of Football Video Production while Stout will be the Assistant Director of Football production. The significant move is acceptable to some while to others, they are still fussing about it. “So my opinion when they first hired them, because I mean, I really don’t pay attention to other schools and some of the work (Brown and Stout) were doing. So I kind of was like, Okay, yeah, no big deal.” Williams explained to Ryan Abraham.

Williams himself in hindsight would admit that there was a slight miscalculation in the move. This is because Stout and Brown was an amazing team and creative team that worked on high quality and impressive videos that garnered millions of viewers once they were posted across multiple social media platforms. In 2019 during the Tiger’s championship season, the duo worked on hype videos that attracted 21 million videos within 6 months. Notably, the Tiger’s success and winning of Heisman Trophy enhanced the virality of their work. However, LSU’s video last season efforts were commendable and noticeable in the college football world. While Donte Williams was among those that missed out on Stout and Brown’s work last season, he explained how the duo’s portfolio has changed his stance. “Then I looked and saw the work that they were doing at their previous school. I thought it was a phenomenal hire,” Donte said with a smile.

Congress Approves Proxy and Virtual Voting in a Historical Move